A Comprehensive Guide on how Scanners Work 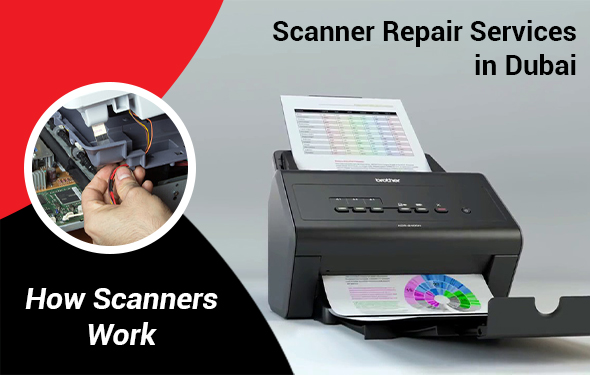 Opt for Scanner Repair Services in Dubai to Resolve All Issues

Over years, scanners have become an integral part of every business. Be it SMBs or large organizations, scanners have their place in each of them. They perform a very special task of processing an image to its digital form, which can then be utilized for multiple purposes.

The basic principle of a scanner is simple. It analyzes an image and processes it in a way so that the information on the analog document could be saved to a file on your computer. The file can then also be enhanced, taken a print of, or used in designs. Thus, through scanners, we get a simple and effective way to digitize documents.

In this article, we will go into details of how scanners work. We will discuss mainly flatbed scanners, which are also the most commonly used scanners throughout the globe. In case you come across any issues with your scanner, then look for reliable Scanner Repair Services in Dubai.

Scanners can be broadly classified into four types, depending on how they scan and also the quality of the scan. Let’s take a look at what they are:

These are also called desktop scanners. Flatbed scanners get its name from the fact that it provides a flat glass bed or surface to hold a paper, or a book, or anything that needs to be scanned. These are the most versatile and widely used scanners and also the main subject of our discussion here.

Sheet-fed scanners are just like flatbed scanners differing only in the fact that here, the scan head is immobile, and the document is moved.

These scanners use the same principle of a flatbed scanner but instead of motorized beds, users themselves have to move the scan head to capture the whole document. These are useful for a quick scan. However, the scan quality is not that good in case of handheld scanners. You might come across frequent issues with these machines for which, you need to opt for Scanner Repair Services in Dubai at the earliest.

These scanners are used to capture amazingly detailed images and is mainly used by the publishing industry.

Detailed Analysis of a Flatbed Scanner

A flatbed scanner typically consists of parts such as mirrors, lamps, and a scan head. Apart from these, there are a lot of other components as well. Out of these, the CCD array is the most vital component of a scanner. Most scanners use this CCD technology for capturing images. CCD is a collection of tiny light-sensitive diodes, known as photo sites, whose function is to convert light (photons) bounced from the document to electrons (electrical charge).

Light bounces from the image or document to be scanned and then it follows a complex path through mirrors, lenses, and filters to reach the CCD. Here, the light hits the photosites and gets converted to electrical charge.

Thus, CCD is the fundamental part of a scanner, where the major conversion from light to electrical signal takes place.

Now, let’s take a look at the scanning process.

The Process of Scanning with a Flatbed Scanner

A typical flatbed scanner goes through some steps when it scans a document. They are as follows:

A pass in a scanner means that it has performed one full scan of the document. A three-pass mechanism is used by some scanners. There are different colored filters for each pass, between the lens and the CCD. The three colors are basically the three primary colors: red, blue, and green. After completion of the passes, software from the scanner assembles and converts the three images into a single fully colored image.

A single-pass method, in contrast, uses the lens to split the image into three smaller parts. Each of them passes through a different colored filter and ultimately the scanner software merges them to form one single image. If there is any fault or defect in the passing mechanism, then get in touch with a reliable team for Scanner Repair Services in Dubai.

Scanning a document is only a job half done. It must be transferred to a computer, for it to be utilized. For that purpose, a scanner uses connections such as a parallel connection, a SCSI (small computer system interface), a universal series bus (USB), or a FireWire connection. Each connection differs from one another and affects the speed and resolution of the scan. Each has its own utility. For example, FireWire connections are mostly used in high-end scanners to produce sharp image quality, and they are incredibly fast as well.

Drivers are software on the computer that communicates with the scanner. What about the language of communication? The language that the majority of scanners use is called TWAIN. For example, Adobe Photoshop supports TWAIN standard, so that you can acquire an image from the scanner from within Photoshop.

Apart from TWAIN, scanners also come with software such as OCR. An OCR (optical character recognition) allows words from a document to be scanned and transformed into computer-based text.

Mentioned above is the complete procedure of the working of a scanner.

Ans: A scanner is a device that captures images from analog documents such as a photograph, and transforms it into a digital form, which can then be edited and used for multiple purposes.

Answer: CIS (contact image sensor) are image sensors that are used for direct contact with the document in a flatbed scanner.

Answer: A copier simply prints a document into single or multiple sheets of blank paper. A scanner, however, stores a digital copy of the document into the computer, which can be used in electronic mediums and can be printed as well.

Answer: Scanned documents are easy to track electronically, and electronic documents save time and effort.